The concern for how technology will change how we communicate is ancient; in The Phaedrus, Plato recounts the myth of Theuth who brings writing Thamus, king of Egypt. 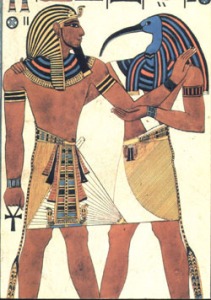 Theuth claims that writing will make the Egyptians wiser. However, Thamus is skeptical: “this invention will produce forgetfulness in the minds of those who learn to use it … their trust in writing, produced by external characters which are not part of themselves, will discourage the use of their own memory within them. You have invented an elixir not of memory, but of reminding; and you offer your pupils the appearance of wisdom” (165). Theuth and Thamus’s dialogue could be neatly transposed onto debates about the advent of digital media; Wired becomes Theuth lauding the advent of computers, while Neo-Luddite Sven Birkerts and others like him take the role of Thamus questioning the value of this new invention. New media have sparked debate for millennia.

The anxiety caused by new media may be complicated because humans use technology to communicate and make sense of their world. In The Two Virtuals, Alexander Reid (2007) ties the use of technology to knowledge: “knowledge is produced through the process of externalization, through its articulation in symbols” (29). The cave paintings as Lascaux show early humans using dyes and charcoal to share their understanding of their surroundings. Unlike Plato’s Thamus who fears externalization, Reid argues that technologies are what create human knowledge and culture. People use tools to communicate and to live, and we cannot be separated from them. Tools like the stylus, quill, ink pen, press, typewriter, and dot-matrix printer work with developments like papyrus, velum, linen paper, and wood-pulp paper to help us share and shape our beliefs, our fears, and our hopes for the future. As WELL founder Steward Brand (1993) argues in the first issue of Wired: “The cutting edge of new media is the cutting edge of human cognition, which is the edge of what it means to be human” (43). Technologies shape how we communicate with each other. For example in Orality and Literacy, Ong (1982) claims that media like radio and television resurrect oral culture: “electronic technology has brought us into the age of ‘secondary orality.’ This new orality has striking resemblances to the old in its participatory mystique, its fostering a communal sense, its concentration on the present moment, and even its use of formulas” (133). In other words, new technologies can change how we read, how we participate in popular culture, and how we remain connected to our families.