Two years ago, I decided to move to Memphis. When I told my friends and family, nearly all of whom are from great northern states, they were shocked. They said true and practical things like, “but you hate the heat” and “it’s so far away from home.” However, the also said some extremely biased things like, “they’re all racists down there” and “you’re not going to start carrying a gun.” Of course, as a life-long Yankee, I drove through Illinois and crossed the Mississippi uncertain and maybe even a little afraid. 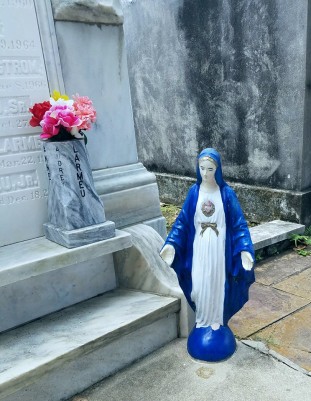 Nevertheless, I’ve learned a lot about “the South” since moving to Memphis. I think one of the most important lessons may be that it’s not the South, but Southern people. To think of everything south of Illinois, Indiana, and Ohio as a unified whole is both unfair and inaccurate. Sure, they may say “ya’ll” but that doesn’t mean every person who lives down here believes and behaves the same.  For example, I was shocked at how different New Orleans is compared to other Southern cities I’ve visited. In NOLA, diversity pushed beyond race and challenged my ideas of what it means to be Southern. The obvious Catholicism made me feel like I was back in Chicago, New York, or Pittsburgh where the Poles, Latinos, and the Irish dominated for decades. Unlike Memphis, NOLA seems cosmopolitan and open.  Urbane not merely urban.

At the same time, NOLA does share the legacy of racism and slavery with Memphis. Walking around the French Quarter with music spilling out of every door, it’s hard to remember that slaves laid the bricks and were sold on the streets. Similarly, people wandering around downtown Memphis and onto Beale street, might miss the Ida B. Wells plague commemorating her work to end lynching throughout the South. The streets of most southern cities are full of these tangible reminders.

And yet, both cities still grapple with the socio-economic inequalities created by slavery. For NOLA, Katrina destroyed neighborhoods, broke families, and drowned people in the deluge. In Memphis, neighborhoods, families, and people are destroyed by gun violence. Both cities seem helpless in the face of this deluge. But, this isn’t unique to the South. Chicago, Baltimore, and St. Louis face similar challenges.

So, what does it mean to be Southern?  I’m still not sure. I know it requires thinking critically about race and poverty, but that’s not unique to this region. At the same time, the history of slavery and civil rights movement may require Southerners to act and speak more purposefully about these issues. As a carpet-bagger, I’m not sure I should lead the charge. But as someone who lives here now, I want to embrace the Southern in us all.